5 ways to improve your posture and ease back pain


#1 What type of chair are you sitting on?

I prefer a plain old stool, Chair backs make you lazy and stop your postural muscles in your back from working. #2 Locate your sitting bones and use them!

While sitting slide your hand underneath your bottom and locate the two nobbley bits - these are your sitting bones and form the basis of the support for your upper body when sitting. Now slump, what do you notice (you are no longer sitting on your sitting bones). So find your sit bones again - you will probably feel more balanced and poised and on your way to better posture. 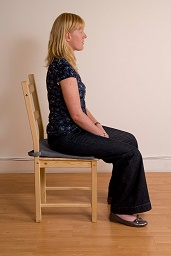 Think that you are wearing an invisible crown and think into the top of your head as your spine lengthens towards the crown of your head. Alternatively you could think of the upper molars (the teeth at the back) coming away from your sitting bones. You may get a sense of your torso lengthening at this point.

#4 Notice where your feet are

Are your feet tucked under the chair or your legs crossed? We all know these are bad habits, but seriously they are bad habits which may cause us to overarch our lower spine as we need our legs and feet to help support the weight of our upper body.

#5 Notice any tension in your shoulders

Observe any tension in your shoulders and allow them to soften. Slumping causes us to have rounded shoulders and a rounded upper torso, which ultimately can develop into a dowagers hump. 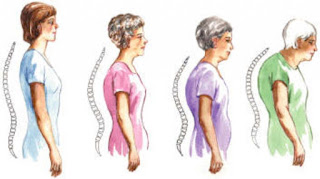 So to recap, we now know we have sit bones, so try using them more. Why not put a post it note on the edge of your computer screen to remind you. We can think into our invisible crown and notice if our shoulders are opening out naturally or are they rounded or raised.

Apply these basic skills and you are on your way to having better posture.

If you've enjoyed reading this post and found it useful, why not sign up to our regular newsletter to receive more tips on becoming pain free.

Using a standing desk and avoiding back pain

If you are considering purchasing a standing desk or already use one it's worthwhile thinking about how you are going to stand.

Many people will go to their habitual posture that they use when lowering their gaze to look at something. Often this will involve collapse of the torso particularly around the chest area, which in turn will cause your shoulders to round, this will also prevent your arms aand shoulders to work at the optimum - the very thing you are going to need when working at your desk and computer.
There may also be a resultant compensatory adjustment to your balance, involving your lower back and you may start to get back pain.
If the head drops forward as it will probably do as the weight of the head is 60% forward then it will also result in neck pain too.

Did you know that the average head weighs 10-14lbs similar to this bowling ball? 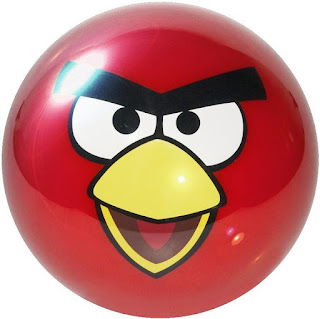 Quite a shock when I pass a bowling ball around when I give introductory talks on the Alexander Technique, and how misuse of the head, neck back relationship can cause pain.

So how do we stand effectively at a standing desk?

What are your running habits?

I've just been out for a lunchtime dogwalk and saw several people out for a lunchtime run. What did I notice about their running - that they had all developed habits that affected their running, some good & some bad. The first person who ran past me had his head tilted to one side quite severely probably around 5 degrees, the second person I saw was putting a lot of effort into his running and pulling his head right back, I next saw two people running together with contrasting running styles, one ran using most of his foot with a small amount of heel strike the other ran so lightly on the balls of his feet with minimal effort.

All of the habits developed apart from the guy who was running lightly on the balls of his feet will be affecting their running performance and may in the long term result in some form of injury.

Have we lost something in our search for advancement 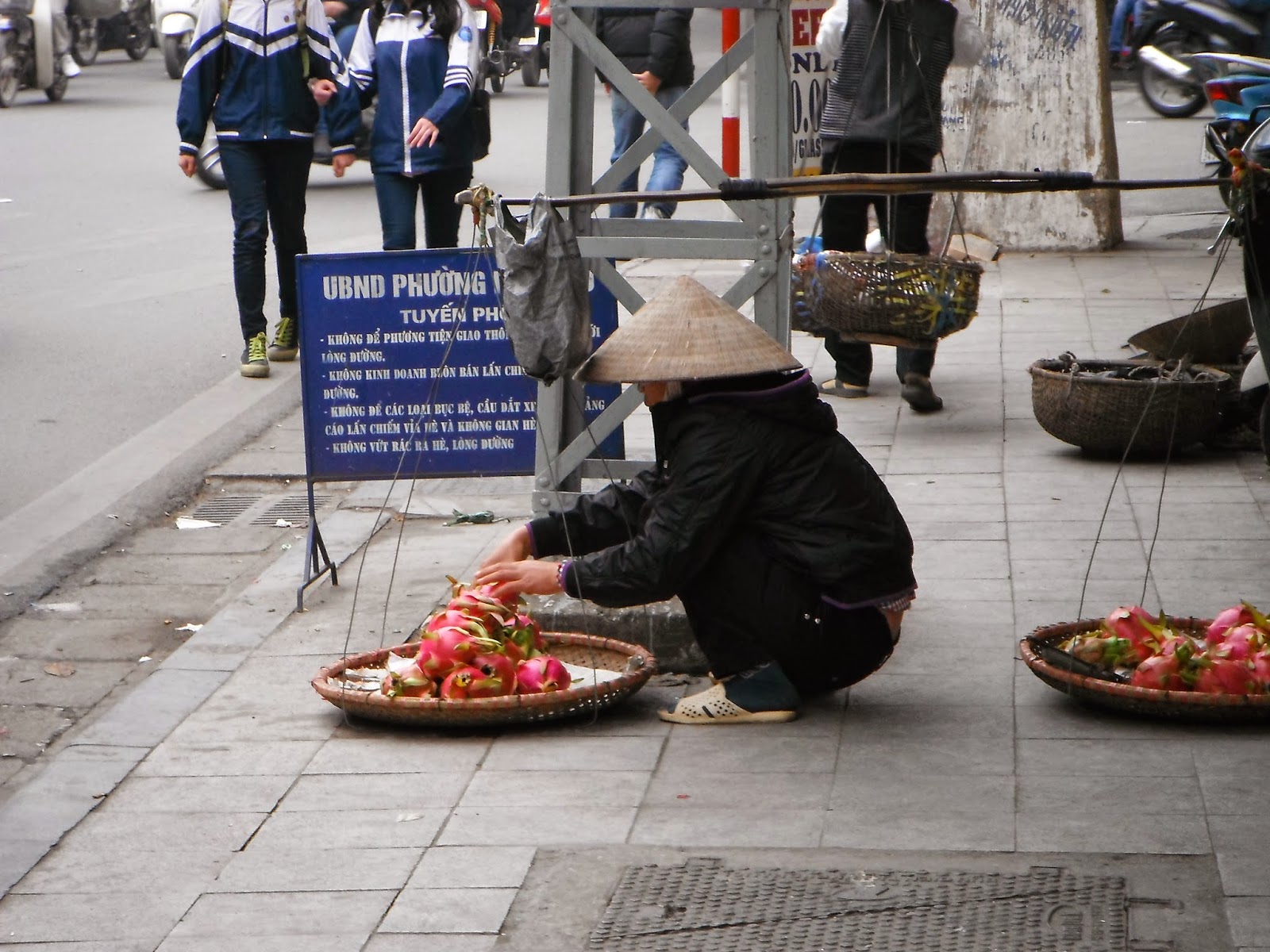 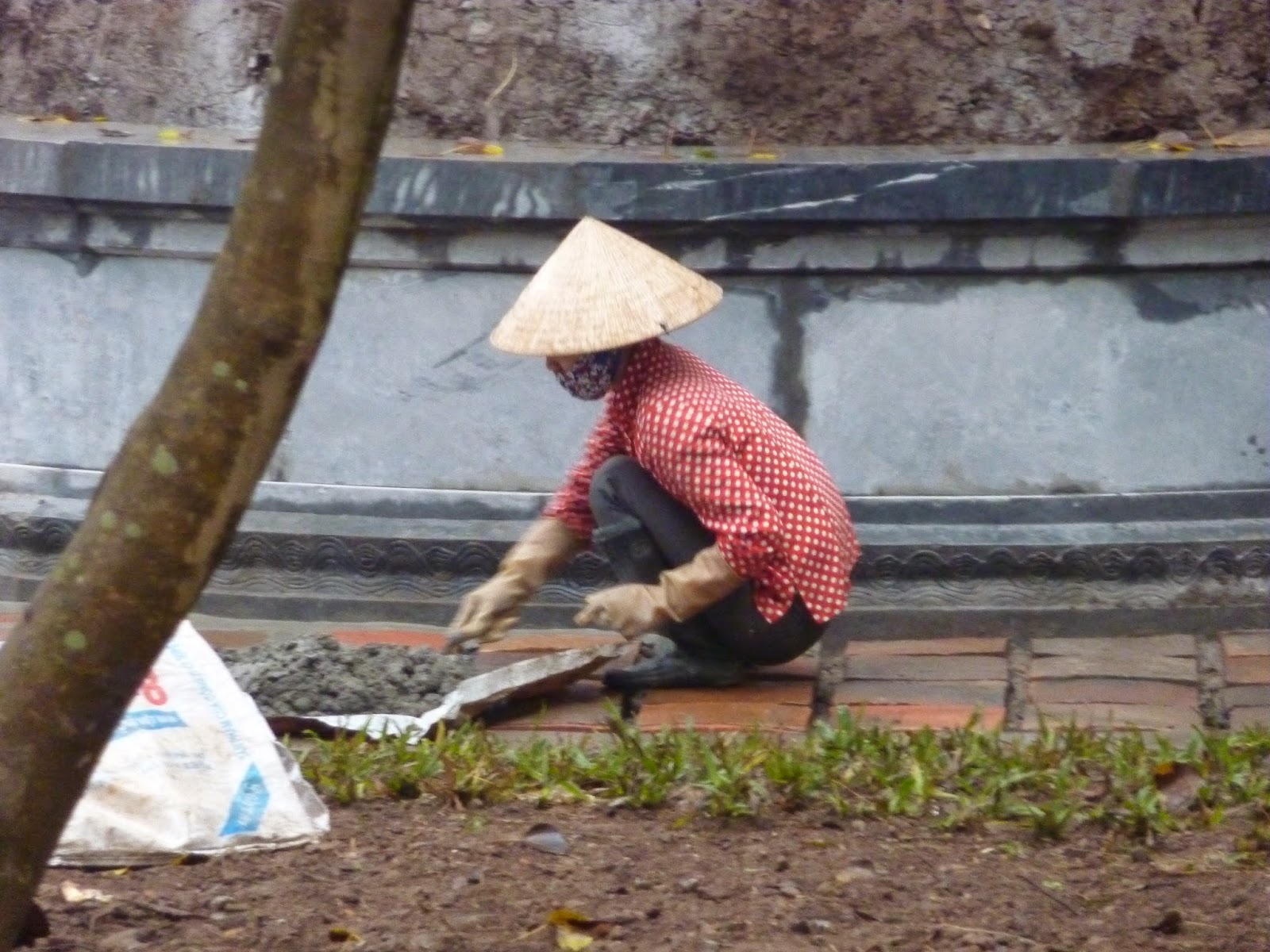 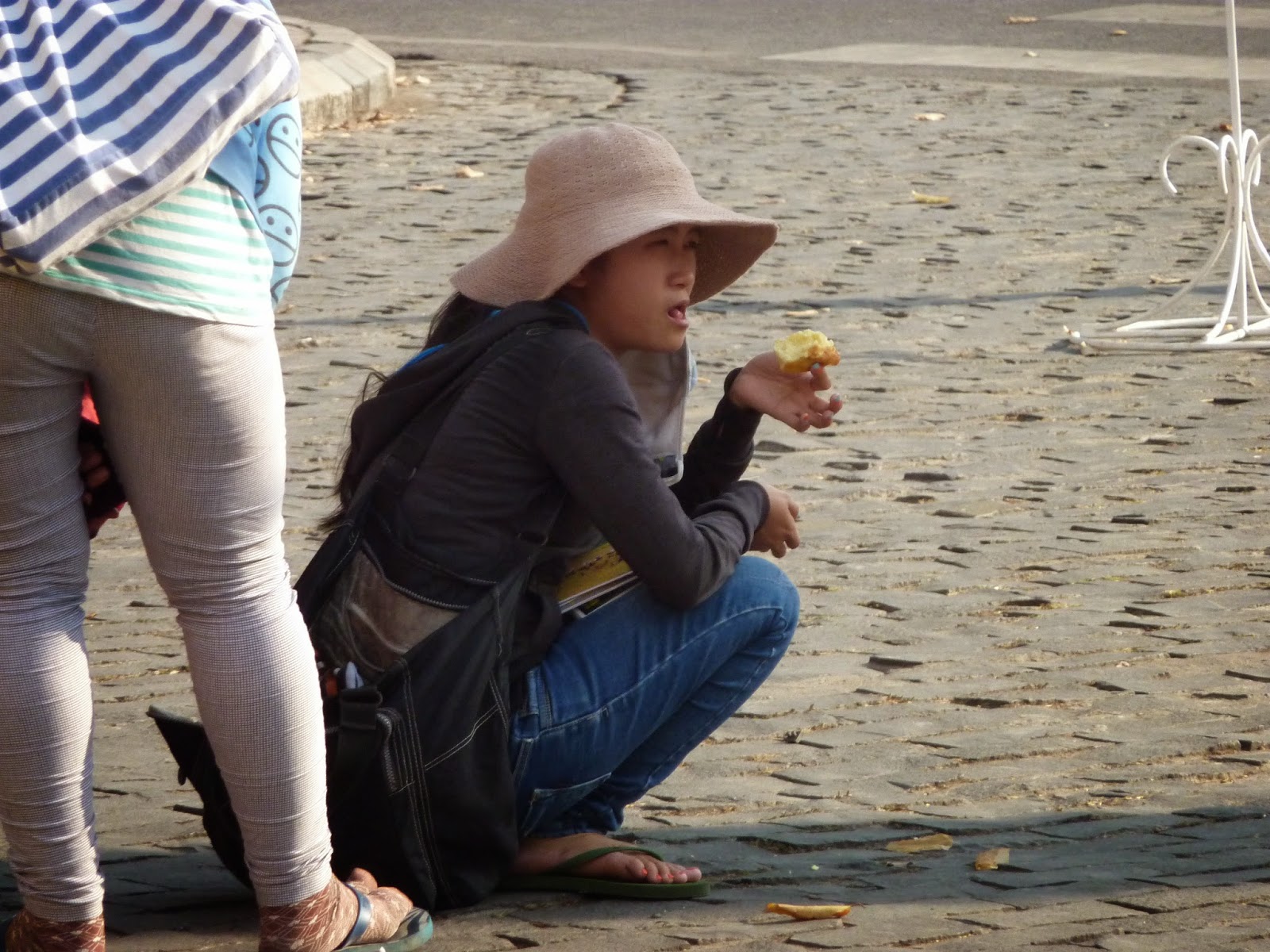 As a toddler our first steps onto two feet involved us being able to squat. Try and observe young children and you will see that they do this all the time without thinking. 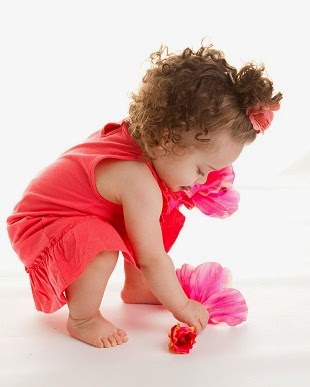 Then what happens we go to school sit slumped over our desks, laptops & tablets and we stop using our hip joints and start to bend with our spine. Yes our spine is curved and its design with vertebrae and discs does allow it to bend slightly but it is not really what it was designed to do. Instead we need to maintain a straight posture and bend at the hips. I would say in my experience as an Alexander Technique Teacher the majority of people I work with have completely lost the sense of where their hip joint is and how important it is in bending. People know they should bend with the knees but forget about the hip joint so when they bend they tend to bend at the knees and in the spine thus overusing the back muscles. No wonder back pain is so prevelant.

So what can we do to avoid this. Try this exercise to locate our hip joints by placing our hands on the point usually just below the front pockets in jeans. Now stand in front of a chair and fold over this joint allowing the knees to release forward as you go into the chair. Try to remember the hip joint whenever you bend and your back will become less tired as a result.
Posted by Unknown at 04:37 No comments:

Last week I was away for a weeks skiing along the Finnish Russian border just below the Arctic Circle. We were with an organised group who had a lot more experience than my husband and I. I had done a little x country skiing on waxed skis whist living in Vermont but very little and my husband had only done about an hour previously. The first thing we both felt was fear when we put on XC skis, they are so narrow in comparison to downhill skis and you have just a tiny clip at the toe as the only form of attachment to the ski.

We set off on the first day and shuffled our way along falling over occasionally but we appeared to be able to just about keep pace with the group but it did seem a lot of effort, soon we had broken into a sweat and were tiring quickly so although we were keeping up it was an effort to do so. The second day was "the big day" - 25km which is not for the faint hearted. At first we tried to keep up with the others but every time we stopped for a drink or to absorb the view someone would pass us. So in the end we were at the back and very conscious  of being so. So we just pushed ourselves to try and keep up it was not enjoyable.

Day 3 was an easier day (18km) so my husband and I decided we would take it easy and not try to keep with the main group, we would stop and rest, have a drink of water and absorb the amazing scenery. 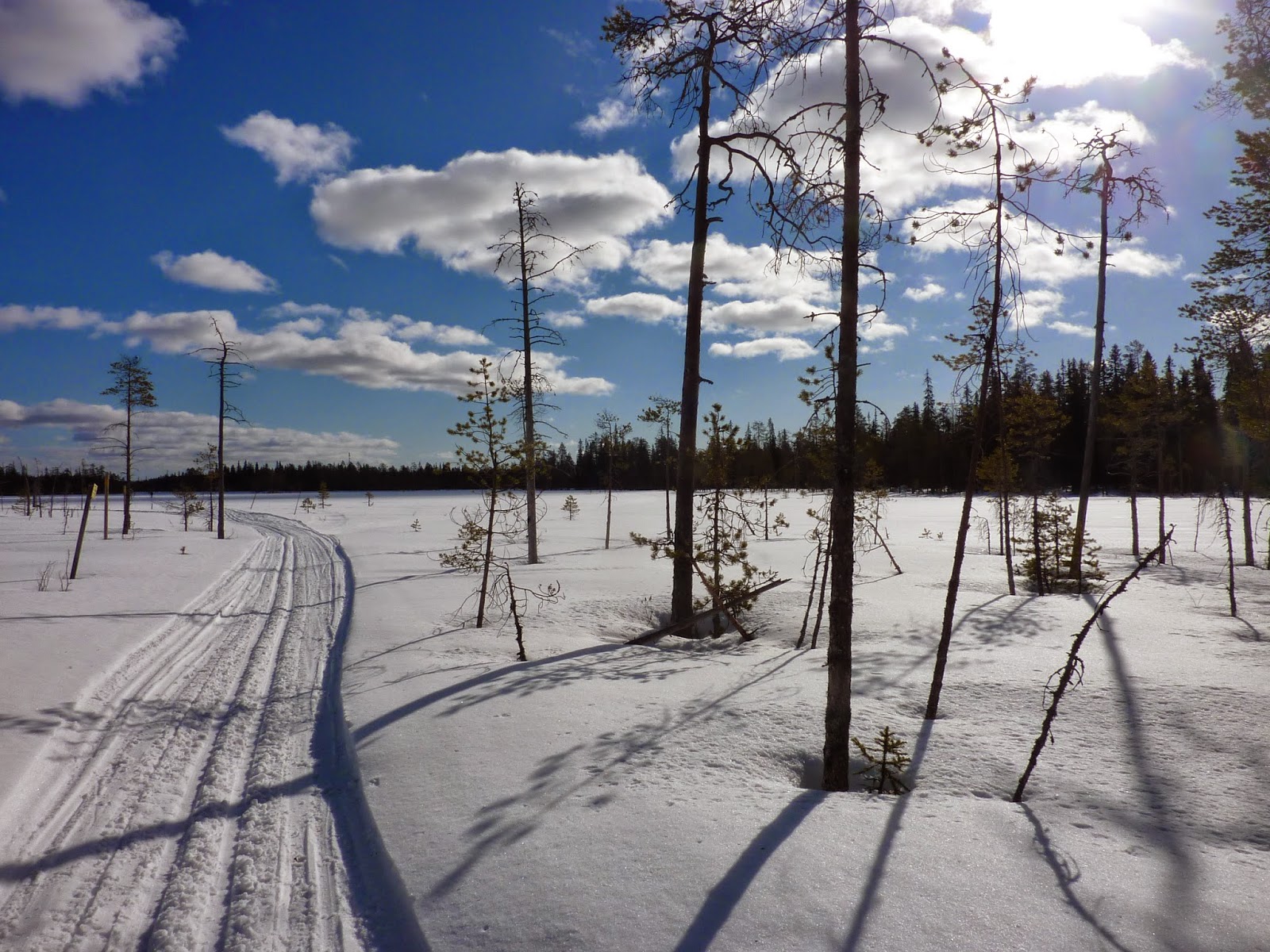 This became quite a revelation because going slower and putting less effort in actually enabled me to go quicker! I started to "listen" to my skis and allowed them to glide. I worked out that by freeing at the ankles, keeping weight angled forward onto the ball of my foot it prevented the grooves on the bottom of the skis from engaging and the skis just glided along. I then started to think about lengthening up the spine away from the heels and listening to my body and the ski. Soon I was skiing really quickly without breaking into a sweat.

By days 4 & 5 I was literally flying. I was able to keep ahead of most of the group and stop to listen to the silence of this amazing wilderness experience.

So what did I learn. First, accept your limitations don't try to keep up with people who are better than you. Secondly, apply the Alexander Technique principles of the means whereby ie how are you skiing, listen to the whole of your body and the ski beneath you. Thirdly, take time to pause and absorb the world around you, the experience will be a whole lot more enjoyable.

How to avoid back pain while cycling

On Sunday I turn 50 and I can honestly say that it doesn't bother me one bit. This is in total contrast to when I turned 40. I was really not ready to enter what people call middle age. I had just torn my ACL skiing and I had ongoing problems with my back. I just felt OLD!!

However as my 50th approaches I feel great. I am pain free, I feel that I move with greater ease and I am probably fitter and more active than I was able to be when I turned 40. In fact only yesterday I cycled 13 miles in an hour and felt great afterwards. Last week I cycled 31 miles in one go my furthest ever.

The secret of this has been the discovery of the Alexander Technique and what it can do for your general health, well being and performance.

When cycling it is important to be aware that the contact that we feel with the saddle can be used to lengthen our spine and avoid the back pain associated with hunching over the handle bars. To achieve this lengthening we need to be using the hip joint correctly. The hip joint needs to be located by finding the folding point at the top of the leg (the crease in the trousers). This acts as the hinge which we fold over as we think of our spine lengthening. If we continue to think of our spine lengthening as we cycle it can help keep us free from back pain. It will also help if you think about the muscles at the back of the neck softening and lengthening and dropping the nose just a bit to avoid over tightening the neck muscles as muscles in the neck and around the spine are integrated and work together.

Email ThisBlogThis!Share to TwitterShare to FacebookShare to Pinterest
Labels: cycling, how to avoid back pain when cycling
Home
Subscribe to: Posts (Atom) 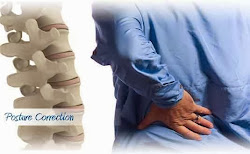